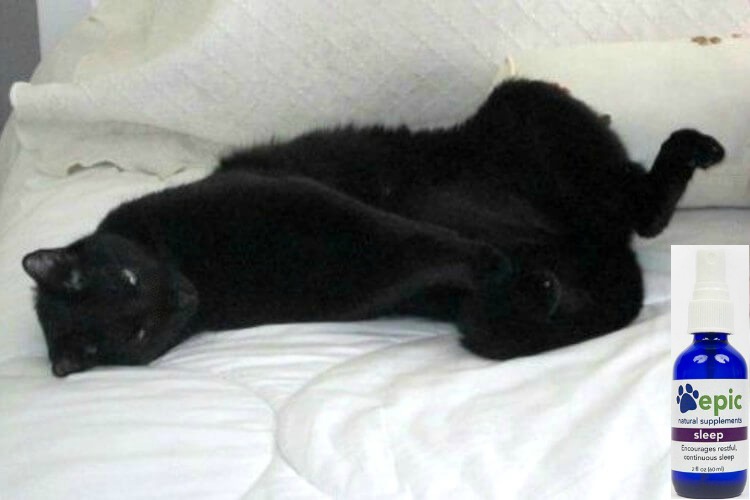 My cat, Murphy, no longer wakes me up at night thanks to Sleep from Epic Pet Health.

I have long had an issue that a lot of kitty parents struggle with: my cat would wake me up at night and not let me go back to sleep. My Murphy, pictured above, would arouse me around 4 a.m. every morning by sitting next to my head and playfully, but forcefully, patting my hair and cheek. If that didn’t work, he’d vigorously scratch at my dresser until I would finally stumble out of bed and do his bidding.

I was constantly exhausted and desperate for a solution. So I was more than willing to try Sleep from Epic Pet Health, a natural remedy that promotes restful slumber for pets, thus enabling their humans to catch some much-needed Zs.

Why Cats Wake Humans in the Middle of the Night

While dogs may engage in this most annoying, distressing behavior, cats are more prone to rouse humans from their slumber, in the most stubbornly irritating ways. Whether it’s sitting on your head, meowing loudly in your ear or burrowing under the covers and biting your feet, restless kitties can wreck havoc on their human’s sleep patterns.

Like their large cat cousins in the wild, domesticated kitties are inherently nocturnal because they are hunters by nature, who are genetically programmed to stalk their prey between dusk and dawn. So they sleep a lot during the day to conserve their energy. According to Pet MD, cats will snooze anywhere from 15 to 20 hours a day! Which means that they are more prone to roam around at night, and wake their humans.

Other reasons for cats waking people in the middle of the night are illness, stress, hunger or just wanting attention from their humans. Murphy falls into the latter category. He is the self-appointed king of our home; I am merely his loyal subject and servant. And when he’s up, I must be, too. So I would go through my days like a zombie.

How Epic Pet Health Sleep Came to the Rescue

The Sleep supplement from Epic Pet Health encourages restful, continuous sleep in dogs and cats naturally, due to holistic ingredients such as water, alkaline calcium, magnesium, potassium, zinc and other natural trace minerals. All you have to do is apply two sprays or 10 drops on food or water before bedtime, then mist on or near a pet’s face for fastest results. In Murphy’s case, he likes to have a midnight snack of canned food. So I’d spray some on this, and mist the top of his head with a few spritzes.

Voila! It worked! As Murphy began sleeping through the night, I was able to, also. And I no longer go through my days as a zombie slave to a furry control freak. Thanks to Sleep, just one of the many fine natural products from Epic Pet Health.

Alissa Wolf is an award-winning journalist and lifelong animal lover who lives in New Jersey with her cats, the dashingly handsome Murphy, and Lily, a former feline fashion model. She has written about a variety of pet tops for Catster, Dogster, Sniff & Barkens and her blog, Critter Corner. She is also the author of the memoirs "Punk Rock Princess" from Bear Manor Media.
Related Articles
New Coupon Codes for Epic Pet Health
Use “Fur” for Pet Hair Regrowth After Surgery
Hallmark’s American Rescue Dog Show

2 thoughts to “Does Your Cat Wake You Up at Night? Try Sleep from Epic Pet Health”